This article is about the series. For the book, see Artemis Fowl by Eoin Colfer. 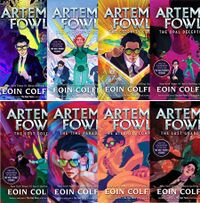 Artemis Fowl is a middle grade/young adult series by Eoin Colfer that follows the namesake Irish teenaged criminal mastermind and his growth from a ruthless thief to a more benevolent person. Artemis manages to kidnap Captain Holly Short of the Lower Elements Police, who is a member of a secret race of hi-tech fairies who live underground. He transitions from a antagonistic role to a protagonistic one, working cooperatively with the fairies to curtail human and fairy mischief.

The series takes cues from suspense, action, "heist" crime films, and James Bond-Esque spy movies and transplants them into a modern fantasy setting. Artemis' character growth and redemption arc is commended as one of the best in children's literature.

Needs To Be Moved to Appropriate Book Pages

The second half of the series, though still as humorous and enjoyable, does delve into more complex and darker themes. As such, most of these trigger warnings apply to books 5 through 8.

All of the fairies are canonly people of color, despite the movie and book covers whitewashing them. For example, Holly is described to have nut brown or coffee brown skin, but the movie casted her as white, and the new covers by Goni Montes depicts her as white. Many fans have called for Disney to acknowledge their whitewashing of a main character/deuteragonist.