Do You Want to Start a Scandal by Tessa Dare

Do You Want to Start a Scandal 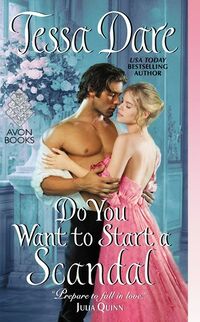 Do You Want to Start a Scandal by Tessa Dare is an adult historical romance novel, originally published on September 27, 2016. It is the fifth book in the Spindle Cove series.

The following note and content warnings are listed on the author's website: General notes: To varying degrees, all of my books include descriptive sexual content, drinking, and profanity. The occasional punch is thrown. Weapons are brandished. Attempted robberies and minor carriage accidents are not uncommon.