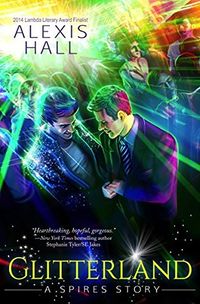 Glitterland by Alexis Hall is an adult romance novel, originally published on May 15, 2013. It is the first book in the Spires Universe series.

Sexual content, character with bipolar depression, past hospitalisation due to suicide attempt, talk of past suicide, suicidal ideation, discussion of self-harm, attempted on page drug use, parental neglect, panic attack, outing of a character’s mental health