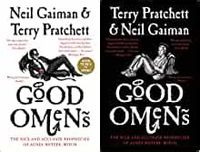 Good Omens: The Nice and Accurate Prophecies of Agnes Nutter, Witch by Terry Pratchett and Neil Gaiman is an adult religious satire, originally published on May 10, 1990.