The Weight of the Stars by K. Ancrum

The Weight of the Stars 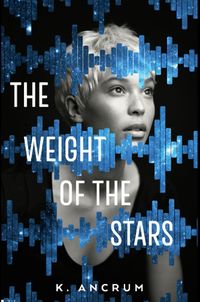 The Weight of the Stars by K. Ancrum is a young adult science fiction novel, originally published on March 19, 2019.

There is a line in this book that I have been informed is abelist where a mute character allows another character to think they’re deaf. I’m horrified about it and working on learning more about abelism and will do better in the future.