Bridges of Smoke by Julie March 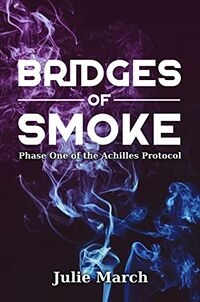 Bridges of Smoke by Julie March is a science fiction novel, originally published on April 13, 2022. It is the first book in The Achilles Protocol.

Bridges of Smoke is an apocalyptic sci-fi thriller, and as such, contains some heavy subject matter. This includes:

If any of these are topics you would rather avoid, please do. I’ve done my best to depict these topics honestly and with sensitivity, along with humor where possible, but that will never be more important than the mental health of a reader.