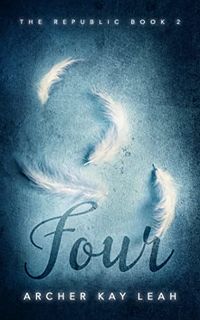 Four by Archer Kay Leah is a fantasy novel, originally published on August 12, 2016. It is the second book in the The Republic series.

Four contains some explicit content, all of which is meant for adult readers. The relationship at the heart of the story is an MM romance. There is a minor amount of MF and MMF intimacy included, but this is not an MMF poly romance.

This story contains emotional and physical situations that could bother some readers, including references to and depictions of self-harm, depression, and complex PTSS/PTSD (post-traumatic stress syndrome/disorder). The story also contains mentions of human trafficking, torture in a character’s past, gang matters and violence, discussions of an execution by way of stoning, and references to an accident in a character's past that resulted in a loved one being left paralyzed.

Please note the story uses gender-neutral pronouns for certain characters (vir, they, them, their). These are not mistakes: they are the chosen pronouns of those characters.